What is a druzy agate?

Druzy Agate. Druzy is the glittering effect of tiny crystals that have formed over the top of a base mineral. The druzy gems grow slowly over millions of years and are found as the very last layer of growth on agate or another colorful base mineral.

What Is Natural Druzy/Druzy Agate ?

Druzy is the glittering effect of tiny crystals over top a colorful mineral. It is beautiful when used in making jewelry. One of the perks to druzy stones is that they are not as expensive as big faceted gemstones and they have sparkle and great color and it can be cut into various shapes with ease. The druzy quartz gems grow slowly over millions of years and are found as the very last layer of growth on agate or another colorful base. It does not always refer to quartz, druzy is any kind of mineral found in a plate-like form, such as garnets, calcite, dolomite and malachite. Common colors are white, yellow, brown, red, and orange. Druzy style beads are great for centerpieces in pendants. While they look sparkly and delicate, druzy quartz is a fairly durable gem.

Druzy quartz is made up of many tiny crystals and it has a velvety and soft appearance to it. There can be large formed crystals or many medium crystals with the formation. Treated colorful crystals are sometimes coated with a film of gold, platinum, sterling silver, or titanium. When the Druzy has titanium on it, this adds cobalt, purple, or various rainbow colors. Agates are also easy to dye, so many different shades of backgrounds for the druzy can be made.

There are various sizes in this type of crystal therе can be very tiny pieces or larger pieces which might be used as display items. The crystals must be cut very carefully as it is easily damaged. The crystal is usually cut fee form to accentuate the beauty of the crystals. In the case of most common quartz material, it is found on the last stages of growth in an agate geode, so pieces are chopped out of the centers of geodes. Some druzy pieces, like garnets, are found

as interlocking crystal plates, when found on matrix, they already have a backing, the lapidary artist simply needs to cut out the form and trim off the background matrix to form the cabochon. Vuggy carbonate clusters are often found to have desirable traits, such as the beautiful druzy quartz over sky blue chrysocolla from Peru or the blocks of bright pink calcite from the Democratic Republic of Congo.

Why it is Popular?

The main reason its popular is that is a very inexpensive material to work with and it can make very nice pieces which make it seem like it’s an expensive gem when it is in fact not expensive at all. You can get good Druzy crystals at many mineral and rock shows for much lower prices than other stones. It all depends on the color and size of the stones but you can get a lot of value for your spending budget. Most of the commercial Druzy quartz comes from Brazil. One of our suggestions is the see the unique natural druzy bead specimens available from FU RONG GEMS.

This is a fun and easy stone to work with. The color and flash make it a surefire way to create something beautiful and eye catching. The edges are usually bezel-set do there’s no chipping with the piece of jewelry. You can also use these stones as display pieces because the agate substrate can be polished to show off the mineral layers.
Our best source of Druzy Cabochons is FU RONG GEMS. 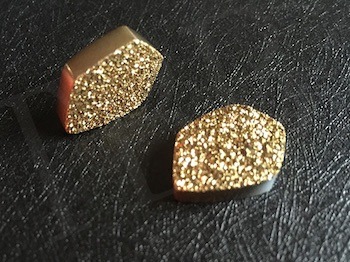 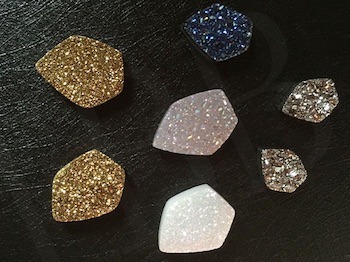 100% Made in China:
All of the Natural Druzy Agate Gemstones are made in the China.

30 Day Returns:
We want and expect you to be thrilled with your purchase, but to provide you peace of mind, we offer a 30 day return policy for most of our products. 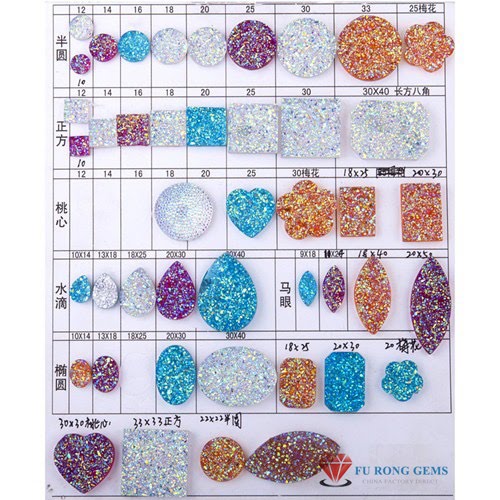 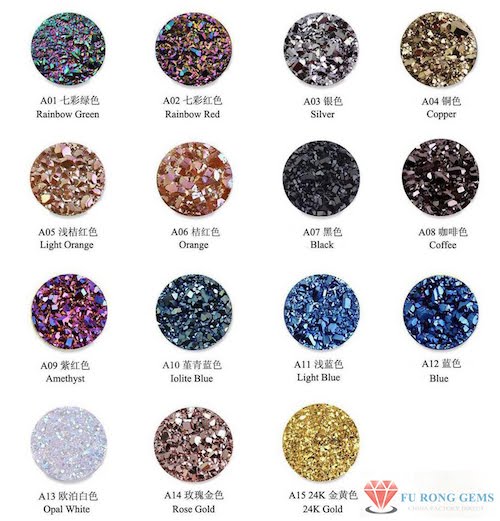 Contact us to day to get the High quality of Natural Druzy Stones, Natural Druzy Agate Gemstones Wholesale at factory direct pricing from China Manufacturers and Suppliers.

Factory & Manufacturer since 2008, strong productive ability.
Ensure the large quantity supply of the stones.
We are the one of the largest manufacturer of Loose gemstones in Wuzhou City.
Strict quality inspection:
15 production processes ; 9 inspection processes ; 8 experienced QC check ;
Every gemstone has its quality assurance.

EXCHANGE & REFUND :
1. 30 days without using and damage of the stone;
2. Bulk product quality not same with samples;
3. Merchandise are not same as order list.

To Enquiry the item you're browsing, Please fill in the message form below: